No Parking on the Dance Floor of Your Mind

No Parking on the Dance Floor of Your Mind

You likely think that you have neutral or “free” parking in your brain, but you don’t.

There is no place or way for you to take in information — let alone a narrative — and assign it a neutral value, pending evaluation.

We like to think that we can hear something out, neutrally and objectively, evaluate it, and then flush it from our minds when and if we judge it false.

And that, post adjudication, we automatically and effectively wash our mental “hands” clean of the bad info.

But it doesn’t work that way.

We don’t work that way.

In order to understand something — in order to picture it, visualize it, and get the “story” — we first have to accept it as true.

And even if we later deem it to be false, the image and the story stays.

Often the “false” label fades but the image remains — something I wrote about in my post on The Sleeper Effect.

The only way to overcome a false narrative is to replace it with a stronger, more vividly dramatic story that hews closer to the truth.

Applying This to Advertising

Basically, your imagery and your storytelling has to do the persuading.

The mistake too many advertising creatives make is layering on entertainment that ends up working against the persuasion.

But if they introduce imagery that goes against the brand, those creative ideas should be killed with extreme prejudice.

Advertising gold comes from whacky creative ideas that introduce powerful imagery and narratives that work FOR the brand.

In an earlier post on “Naming the Disease,” I mentioned advertising great Jim Jordan and used his campaigns for Whisk and Zest as examples.

But Jordan had another campaign that’s a fantastic example of using imagery and narrative to sell:

“Us Tarreyton smokers would rather fight than switch” 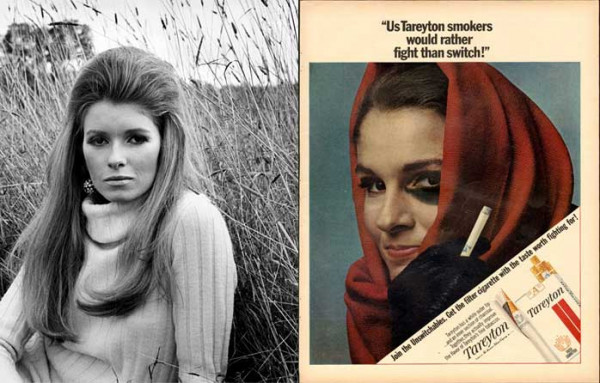 And here are a few pre-1971 TV ads from the same campaign:

Analyzing the “Rather Fight Than Switch” Brilliance

The logic is that an activated charcoal filter plus a regular filter makes for a smoother smoke.

But Tareyton had been promoting that fact for years without traction.

Tareyton cigarettes are so much better than other brands, that brand loyalists would happily get in a fist fight and be socked in the eye over their love for Tareyton’s smooth-smoking pleasure.

Now, this is an idiotic and non-sensical story.

Who in the wide, wide world of sports is punching them in the face over their preferred brand of cigarettes? Why would anyone need to fight in order to smoke the brand they like?

But none of that matters.

Because there’s no free parking on the dance floor of your imagination.

The audience is presented with a startling and attention grabbing image, laden with story appeal.

So much so it could have been (and, hell, maybe even was, ripped from a Norman Rockwell painting).

Your mind instantly wants to make sense of this — to know the story behind it.

And, boom, you’re given a narrative that forces you to imagine a Tareyton brand loyalist willing to physically fist-fight rather than switch brands.

So no matter how much your rational mind may adjudicate the story as nonsense, the image and the narrative remain.

And in an era where there was pressure to stop smoking, the spill-over of the campaign in your imagination is such to imagine people fighting to continue smoking Tareyton cigs rather than quitting altogether.

See how your mind will work to make sense of the story, rather than simply discard it?

This is how an also-ran in the cigarette market spiked and sustained sales, becoming a Top 10 brand for well over a decade.

What About YOUR Advertising?

So what about your ad campaigns?

Are your ads letting the imagery and the story-logic do the persuading and selling?

Or are they relying on whacky creative that’s actually counter-productive?

Or simply hoping regular logic will be enough?

If it’s any of the latter, you not only need a new campaign, you need a better ad consultant.