Understand this: William Shatner did NOT pay to fly aboard Blue Origin.

He was personally invited by Jeff Bezos to fly aboard his spaceship.

Which is kind of weird when you think about it.

Yet you probably didn’t think about it.

You had a gut reaction something along the lines of:

“Of course Captain Kirk belongs aboard a spaceship! How cool to have him aboard”

Except, he’s NOT Captain Kirk.

He’s an aging actor who played the part of Captain Kirk in TV shows and movies, most of which first aired 40 to 60 years ago.

And somewhere in our minds, we know that.

But that part of our mind has nothing to do with how we feel about William Shatner.

And that’s the first marketing lesson:

Lesson #1: Stories Persuade, Even When We Know They’re Made Up Yes, the stories we consume change our feelings and decisions even when we know they’re fictional.

So if you tell stories within your ads — and especially if you transport the audience into those stories — you’re building a rapport with them that’s almost impossible to build any other way.

Which raises the question: was Jeff Bezos motivated to invite Shatner by his personal exposure to Star Trek in his youth? Was it a nostalgic and emotionally driven decision?

It’s a safe bet that Bezos had other, business-oriented reasons for inviting Shatner, which leads us to our second lesson.

Basically, audiences come for the plot but stay for the characters.

Almost no one watched Star Trek TV shows or movies for the plot. They do it to spend more time with Kirk, Spock, Bones, and Scotty.

Just as we watch Bond films for Bond. There’s a reason that Shatner felt he was in competition with Picard — another character from his franchise — rather than say, another franchise altogether such as Star Wars.

For this reason, Bezos knew that inviting Shatner onto Blue Origin’s flight would instantly command the attention of not just Trekkies, but anyone who pays attention to popular culture.

The famous Captain Kirk would draw attention to Bezos’ event in a way that almost nothing else would.

Hell, before this event I hadn’t even heard of Blue Origin. I knew Bezos had a private space program, but never knew the name.

Heck, I’ll even admit to Googling “Shatner + SpaceX” before realizing I had the wrong private space agency.

But now I know — and that’s the power of character and fame. 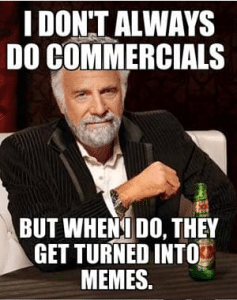 Applying this to marketing, there are few marketing assets more powerful than a well-known and beloved spokesperson or mascot.

Just ask Tony the Tiger, the Keebler Elves, Mister Whipple, Columbia’s One Tough Mother, or Dos Equis’ Most Interesting Man in the World.

People are far more likely to bond with compelling characters than they are to respond to ad-speak or reason-why factoids.

So if you’re not running a story and character-driven ad campaign, you might want to rethink your advertising strategy.