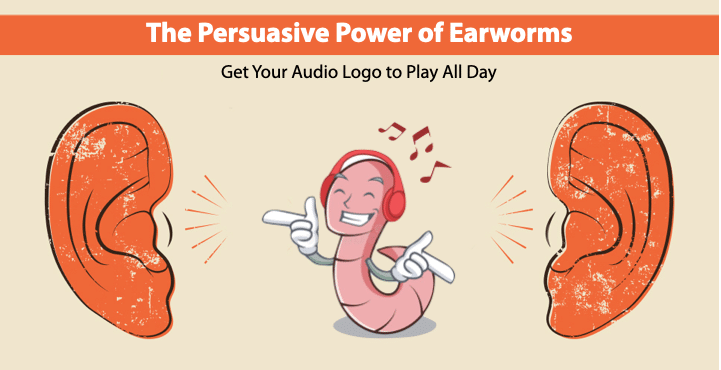 An “earworm” is a catchy piece of music that involuntarily replays in your mind’s phonological loop.

But earworm is the slang for it. Psychologists call it:

Basically, if you’ve ever had a song or a jingle stuck in your head, that’s an earworm.

And advertisers can and should use this phenomenon to their advantage.

Seinfeld even built an episode around this phenomenon:

That episode humorously exaggerates — but still tells the truth about — the persuasive power of earworms.

So how do you use earworms in your advertising? No one wants to admit to liking jingles or being influenced by them, but tell me the truth: do you not start to sing the jingle when I write “Two all beaf patties, special sauce…”?

If you don’t, it’s only because you’re too young. Anyone alive in the late seventies and eighties will remember — and mentally replay — that jingle.

So don’t discount the power of a catchy jingle.

For sonic signatures, they’re basically an audio version of a “distinctive brand asset.” A visual example would be Snickers’ unique font that they use on their candy bars. While a word-based brand asset would be Federal Express’s phrase “when it absolutely, positively has to be there overnight.”

But there are plenty of examples of audio cues and assets, like the audio signature for “intel inside,” or the sound of “snap, crackle, and pop.”

And if you’re not entirely sure advertising earworms really do worm their way into people’s brains, check this out:

A How-To on Sonic Signatures

OK. So how can you create some sonic signatures for YOUR ads?

Well, if there’s not some element of your ad that potentially *could* be a sonic earworm, then you’re missing out.

Ponder these options to see how you might add some earworm magic into your advertising.

You could say your phone number or URL or business name memorably and oddly.

It may feel uncomfortable taking this route, especially if you’re the one having to go weird on the pronunciation, but it’s worth the discomfort.

You could have a colorful, interesting, or interestingly pronounced catchphrase.

These gold buying ads may seem like crappy ads, but that “oh, yeah” catch-phrase sure has gotten stuck in a lot of ears throughout Toronto:

You could come up with a sound effect that could be uniquely yours.

1-800-Got-Junk has made the magical SFX of junk disappearing all their own.

Or you could go whole hog with a jingle or custom music.

My partner Mic Torbay is a jingle genius and his jingle for Safari Niagra is steadily making them a fortune in growth and increased business.*

Put the Power of Earworms to Work for You!

So there you have it. You can either put earworms to work in your advertising, or you can have them used against you.

I suggest the former over the latter, especially if you combine that with a Wizard of Ads branding campaign.

P.S. If my previous plug was too subtle, I’m saying you should contact this guy if you want a great jingle. By merely listening to those darn Safari Niagra ads once, I ended up spending an entire morning with that darn jingle stuck in my head — curse your evil genius, Mic!