Your company is the newcomer. You’re the young upstart that has innovated and is generating significant buzz. How can you expect the leader in your business category to react?

The expression “level playing field” implies a fair contest. In battle, as in marketing, a level field is the last thing we want. Military strategists from Genghis Kahn to Douglas MacArthur have all understood the advantages of taking the high ground. We’re not referring to any moral superiority, but rather to the literal highest point in the physical terrain of the battlefield.

The first army on the field claims the high ground. And field position makes up the bulk of military strategy.

Look at the high ground advantage geometrically. There is only a narrow-angle at which shots fired uphill can hit their intended target. But shooting downhill opens the enemy to exposure from three or four times as big an area. The easier target will suffer greater casualties.

In the 80s marketers studied the writings of Carl von Clausewitz and Sun Tzu and tried to apply battlefield strategies to marketing “warfare.” The parallels work on a superficial level, and the illustrations can make key marketing concepts come to life.

I offer one such illustration.

Imagine two military sections (small squads of 12 soldiers), each under the command of a sergeant. One firmly entrenched at the top of the hill. The other trying to take that hill.

They each take aim and fire. The attacking section, shooting through the narrow aperture provided by the terrain, hit about 20 percent of the targets they shoot at. The defenders, without such limitation, manage to hit 60 percent of the time. 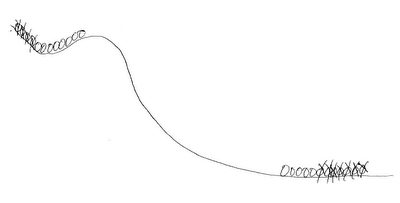 The third volley wipes out the attackers with no additional injury to the defenders.

It works this way nearly every time.

Like the military parallel, marketing field position is largely determined by the first army in the field.

Marketing position is created by the first product in the consumer’s mind. This is why it’s critical that your company be first in the minds of your prospective customers. It’s the reason the incumbent nearly always gets re-elected. It’s the reason Coke still outsells Pepsi. It’s the reason nobody sells more prepared chicken than the Colonel.

How is marketing dominance achieved?

The easiest way is to actually be first.

That’s a rough requirement when your company is second, or third, or even farther down the list of competitors. Someone else already owns the high ground.

The second way to claim a winning position is to create a whole new mental battlefield and be the first to occupy it.

Astute readers will recognize this strategy as specialization.

One more point. The market leader also gets the benefit of the halo effect. Because the leader is so well known, it’s usually assumed that the leading company is “better.” Which means when people hear good news about your industry, they figure it’s news about the better-known company.

If you think about the ramifications of this for just a minute, you’ll have the answer to the original question.

Copying for fun and profit.

How does the established competitor defend his hill against you, the innovative new upstart company?

By doing exactly what you’re doing.

As long as the innovation is peripheral to the core business, the market leader can squash the upstart by simply offering the same innovation.

Sadly, (for you) by duplicating, they’re also likely to get credit for the innovation, and you’re likely to be seen as a small copycat.

But when your innovation IS the core business?

Then you own the high ground on a brand new marketing battlefield, which places you first in the minds of customers who see value in your innovation.

The best thing that can happen to you, in this case, is your competitor, the market leader, changes the way he does business to remain competitive. If his customers perceive that he’s abandoning his core business, he’ll lose a significant number of those customers.

When the established Chinese restaurant replaces moo goo gai pan or sweet and sour pork with spaghetti, tater tots, and cheeseburgers on the buffet, the established competitor’s image is diluted and less appealing to those customers who prefer Chinese cooking.

As soon as the established overnight courier service, in an attempt to combat the new inexpensive courier, limits the cities to which the “overnight, or else” guarantee no longer applies, this established competitor will start losing market share among customers whose jobs depend on guaranteed delivery.

Where’s the new high ground? Which kind of innovation will your company offer your market?

Innovation is critical when you’re fishing for customers.