The evolution of the ease of recording at home or office.

The evolution of the ease of recording at home or office.

The radio station was just telling their clients to record into their iPhones or Android phones.  What!?

Earlier in the COVID summer one of our local clients heard they could not go to the radio station to record their ads.  This was only an issue because they normally come to the Wizard campus and record in the studio with the great booth and really nice microphones.  They’ve been clients for 15+ years and have never thought of recording from their office and being coached over the phone like so many of our clients do.  They then asked us and the radio station how they should proceed.  The radio station replied to all with two videos they had been sending out to their clients about how to record into an iPhone and an Android phone.  I couldn’t believe they were accepting this.  While that is very simple, and the little condenser mics in our smart phones are pretty good, this still pales in comparison to what can be done with less than a hundred dollars. For a few years I had been having clients get the equipment pictured here.  There’s the Yeti mic with the pop screen that is many times difficult to attach to the Yeti’s stand.  The whole thing would sit inside this foam enclosure.  As you can see here the mic is probably too far back.  It would need to be sitting closer to the opening of the enclosure.  I believe this client made his own enclosure box. 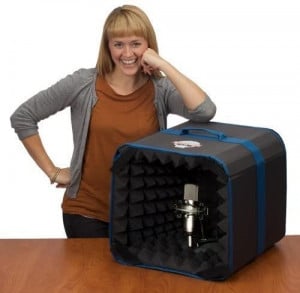 He didn’t want to spend $200 for the Porta-booth plus. The Porta-booth Pro was better but more expensive at $369. The Troy studio portable sound box came along at just around $35.

This year has brought more options for better recording and sound absorption, but there are also options that are easier for the business owner to set up and use. Apogee had a good mic for a long time with the MiC, but I couldn’t always recommend it because it only worked with iOS when it first came out.  Even when the second version came out and worked across more platforms it was still more expensive than the Blue Yeti and had fewer features.  It was much more portable, but a person had to find their own small stand for it.

Early this year, however, Apogee introduced the Hypemic for $350 which included 3 levels of compression I could easily have the client bring in by pushing a button on the mic that would hone in on the voice and put to rest more of the background room sound.  The pop filter is easy to install, and it came with its own case to carry everything.

The Blue Yeti (on the left) is not the best microphone a person can buy.  It has been very easy for the novice to set up and use, however, because it has its own stand and has been recognized across all the major operating systems since its introduction.  The pattern select knob was easy to instruct novices how to choose, and the gain knob was right on the mic instead of being embedded into a control panel or sound preference.  It sounds good for the money, and they are easy to find new or used.  I would even recommend the Yeti Nano on the right below which is even easier to use and cheaper.

Pop filters have never been easy to attach to these stands.  Even the more expensive Blue pop filter that should be designed to attach better does not very easily.  A pop filter is a must, however.  We have some new simple options that combine a pop filter with a foam noise absorption enclosure that just came out this year. First, some Canadians designed and are shipping a really good product.  We have a few of the Kaotica Eyeballs in-house (left) that are made to fit a smaller mic like the Apogee Hypemic.  There’s also a design to fit the fatter mics like the Yetis (right).

Either of these are $200 and ship fast.  The pop filter stays in the right place perfectly away from the mic so a novice doesn’t have to mess with it every time.  It also gives the person recording an easy target to aim their voice.  You can’t find these on Amazon yet, so you’ll have to check out more about them at www.kaoticaeyeball.com. The Chinese, however, have given us a difficult choice now because they are selling their own knock-off of this for $20 to $35, and no one can tell the difference in the sound.  Enter the Actron PF8.  Eventually It will take longer to get to you than Kaotica’s products, but the price difference is astounding.  These aren’t showing up on Amazon either, but Wish.com has them.

I am still liking what I’m hearing with the Blue Yeti (Nano) and the foam ball enclosures.  These are simple for anyone to set up and use.  More expensive has not yet meant demonstrably better sound or simplicity.  If someone is traveling with their setup, then Apogee’s Hypemic may be a better option.

Dave Nevland
I’ve produced Roy’s audio and Wizard of Ads audio for over 15 years. Let’s catch some attention. Let’s make some stuff sound good. Let’s make people hear you in their heads and not forget it.