The Marriage of Teamwork and Character Diamonds

The Marriage of Teamwork and Character Diamonds
Specifics are always more believable than generalities. And case studies can teach more than textbook theories. So let’s pull back the curtain and get specific.  —editor

Yes, we occasionally run install specials. Yes, we advertise our much better version of a tune-up. Those specials account for about 40%, give or take, of our advertising (like the research of Binet and Fields suggests is best). But we’re not just seeing spikes in revenue from our specials. We see a broad rise in revenue that continues even when their specials end. I believe the answer to that overall rising revenue is as simple as a great team, and a great story.

Richie Drew is a great owner. He’s loved by his team, his family, his friends.  If you met him, you’d like him. He’s young, has lots of energy, likes movies, good speaker, inspirational. You dream bigger when you meet him. There’s a sparkle in his eye. He loves providing free maintenance to veterans. He’s got stories about his dad and grandfather. It wasn’t hard to see success in his future.

Marty is Richie’s right hand guy. While Richie is the visionary, the maverick, the jokester, the risk taker, Marty manages the numbers. He cleans up the messes, guards the fort, crosses the t’s and dots the i’s. He makes sure their teams get great reviews for how they serve people. They show up on time. They fulfill their promises to their Comfort Club members and veterans. Sounds like a pretty good company to invite to your home, right?

So what did we bring to the table? No one had told their story well.And that’s not to say that Richie’s a poor writer. He’s actually a great writer and communicator. But no matter who you are, a good storyteller that’s not you can tell your story better than you can.

In our initial consultation with them, we saw something we thought was gold. Maybe it wasn’t exact, but Richie and Marty’s relational dynamic looked a lot like the Odd Couple. That play/show/movie had captivated the world’s attention and generated millions of dollars in entertainment revenue. My team agreed that the same setup would captivate the attention of their trade area. Let’s look at their character diamonds… If you aren’t familiar with character diamonds, think of them as the compass that keeps a character consistently interesting. Taught by David Freeman to Hollywood screenwriters, video game companies and Wizard Academy, character diamonds are the result of the defining characteristics of a person, business or thing. In order to be considered “defining,” they must influence how the character thinks, speaks, acts and see the world. And in order to produce an interesting character they must have conflict and still belong together.

The easiest way to generate a character diamond is to start with the obvious, or a character’s North Star. Then look for a counter star, or surprise trait that doesn’t seem like it would go with the obvious. Often these are paired opposites. In combination they reveal how the character interacts with the outside world.

Roy Williams notes that Pixar does this constantly with their characters… a rat who’s a gourmet chef (Ratatouille), monsters who are afraid of humans (Monsters, Inc), a robot who’s sentimental (Wall-E), a teddy bear who’s sinister and evil (Toy Story 3), Sadness being the Key to Feeling Better (Inside Out), etc…

Once you’ve determined the external, it’s time to look for more inward facing defining characteristics. Look for a vulnerability, weakness or flaw. It’s almost certain that the character’s core identity will be on the opposite end of that flaw. This can be tricky when applied to business owners. Who feels like revealing their weaknesses on mass media? But it’s exactly that vulnerability that causes potential customers to bond with and trust you.

So what are Richie and Marty’s character diamonds? And keep in mind that these don’t encompass all of who they are as people. They only need to keep us close enough for their radio and tv personalities to feel authentic.

Richie’s obvious power is his passionate and inspirational leadership. The surprise is that he’s very relaxed and laid back. He can occasionally come across as an insensitive jokester who has trouble admitting he’s wrong. But directly opposite from that is his huge heart that loves and would die for his family and team.

Marty’s obvious power is his intellectual bent for the details, for excellence. His surprise is that he’s a former LSU football player, manly man. His weakness shows up in his fear of new things, but it’s balanced by his never ending loyalty, especially to Richie. 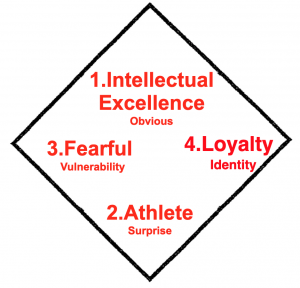 Now look at the character diamonds of Oscar and Felix, the Odd Couple. You can see that despite not being perfect matches, they’re pretty close. The only way to screw this up would be to try cramming all that in one radio or TV ad.

Jacob Harrison is far too good and experienced a writer to do that. Each ad is about only one thing. And sometimes we don’t even include both characters. He’s done a great job entertaining, revealing their personalities little by little and still managing to talk about boring things like heating and air conditioning. Check it out in a couple of their ads.

They’re constantly stopped in public by people who recognize them either from their appearance or their voice. And every one of those people feels like they actually know them, whether or not they’ve recently needed their services. Who do you think those people will call or refer their friends to call when they’re in need?

Applying this to Your Business

If you’re going to put the power of character diamonds to work for you, I’d recommend these 3 very important considerations:

The Secret To It All

I’ve never met anyone whose story wasn’t in some ways interesting. As a storyteller, I’ve always been able to ask questions that produce a riveting story, most often involving tears. Call me Barbara Walters (maybe I should have led with that as the opening line).

The trick is having someone find that story, tell it everywhere, and you having the commitment to inspire your team to live up to it, no matter what. All three need to happen at the same time for growth like this to occur. And no one else can supply the necessary commitment but you.

Peter Nevland
Peter puts together perspicuitous marketing strategies that are precise, plentiful with creativity and result in a multiplying bank account. He's the engineering artist who’ll lead a team of Wizard of Ads partners to help you soar.