Traction, Rocket-Ship, or Earth Shaker? Does Your Branding Have One, Two, or Three Keys to Success?

Traction, Rocket-Ship, or Earth Shaker? Does Your Branding Have One, Two, or Three Keys to Success?

When designing a branding campaign, there are three key levers to success.

And only two are fully in your control.

A campaign with two out of three is enough to dominate the market (depending on the competition, budget, etc).

Heck, even one out of three is enough to get traction.

But a trifecta is the stuff of legends.

Let’s take a look at these levers to success. As you can see from the diagram, the three factors are:

Now let’s drill-down on each factor.

This is typically the first (and often only) branding factor business owners think of, thanks to the notion of the Unique Selling Proposition.

And while I’d be the first say that the USP is a flawed advertising concept for most categories, that’s due more to its rarity than its effectiveness. Why is real USP rare?

Because your competition won’t let you maintain a contest-winning advantage over them for long.

When Dodge came out with the modern minivan in 1984 it was game changing. They sold over a quarter million Caravans that year.

Families vastly preferred the unique benefits of the then-novel minivan to station wagons, and Dodge couldn’t make ‘em fast enough to keep up with demand.

Customer preference was unmistakable, and the market adapted. Capitalism, baby!

So while a great differentiator can accelerate your results, you shouldn’t build your brand solely off of a USP.

‘Cause once the competition catches up, bonding and distinctiveness will be required to hold onto your market share.

If your branding isn’t distinct, you’ll blend into the background of a too-noisy world.

Hence the need to design ads that will “break through the clutter.”

You want people to instantly identify your brand as distinct, using as many stylistic elements as possible — packaging, colors, uniforms, logos, tag-lines, etc.

This is why Brandable Chunks and Ear-wormy sonic signatures are such effective branding tools.

Another example is Asbolut Vodka’s distinctive bottle, or even Chick-Fil-A’s customary response of “My pleasure.”

Note that these distinctive brand assets don’t make direct claims about their product.

Instead they increase the quality and quantity of associations related to the brand, thereby improving “mental availability” (as marketing researchers call it).

Now, normally you want to tie that distinctive recognition to something, like a differentiator or a feeling of shared values and trust.

You want to aim those associations towards purchasing contexts.

That’s where you enter “two-out-of-three” land and see fantastic results.

But don’t fool yourself: familiarity can certainly drive increased sales all by itself.

In other words, if you disregard the traditional showmanship of advertising — jingles and mascots, humor, and catchy slogans — as nothing more than humbug or hooplah, then your branding won’t work as well as it should.

Perhaps the progenitor of bonding style ads is Theodore MacManus, justly famous for his Penalty of Leadership Ad for Cadillac. To quote the master himself:

This is “Positively Good” advertising before Ogilvy even coined the term.

Note that there’s nothing here about being “unique.”

It is simply a claim to sharing the values of the client, providing “honest value,” and being a “sure thing.”

This is a tremendously powerful and frequently overlooked form of advertising that becomes more and more valuable the harder it is to differentiate.

If you’ve ever wondered why I push Genesis Stories so hard, it’s because they are a sure-fire short-cut to bonding with the customer in fields where true differentiation is nearly impossible to come by.

As you may have guessed, Bonding and Brand Distinctiveness are within your control as an owner-operator.

So any branding campaign you launch should have both factors fully baked into it.

But Differentiation normally isn’t totally up to you, depending on your market.

So the branding temptations are to:

And the flash-in-the-pan success of Jolt Cola stands as a warning for what happens when you fall into the first temptation.

Back in 1985, Jolt Cola broke onto the nation’s consciousness with almost zero mass media advertising, thanks to tons of free publicity over their story-worthy differentiation: Jolt cola had all of the sugar and twice the caffeine.

Coke and Pepsi were adding sugar-free and even caffeine-free varieties, so Jolt zigged to their zag.

Boom! Huge sales success — for a little over a year.

But during that time, Jolt didn’t advertise and failed to create brand distinctiveness, apart from that one differentiator:

Jolt eventually attempted distinction by moving to a screw-top can that looked like a battery, but it was too late. In contrast, Red Bull entered the U.S. market in 1997 as an “energy tonic” rather than a garden variety cola.

Instead of just caffeine, Red Bull differentiated itself with then-unique ingredients like taurine and B-vitamins.

But instead of relying on its differentiators, the company doubled-down on distinctiveness by selling Red Bull in a smaller, thinner can at a premium price.

Their tagline was catchier too: “Red Bull gives you wings”

So unlike Jolt Cola’s flash in the pan, Red Bull owned both the market and the mindspace for energy drinks before the competition ever got off the ground. Rockstar Energy launched in 2001 and Monster Energy entered the market in 2002.

Because, again, competition is pretty much guaranteed.

But by then, Red Bull had wisely replaced their initial reliance on differentiation with another key success factor: Bonding.

They were sponsoring the exact kind of extreme sports that their target audience of teenage and young men were naturally drawn to. 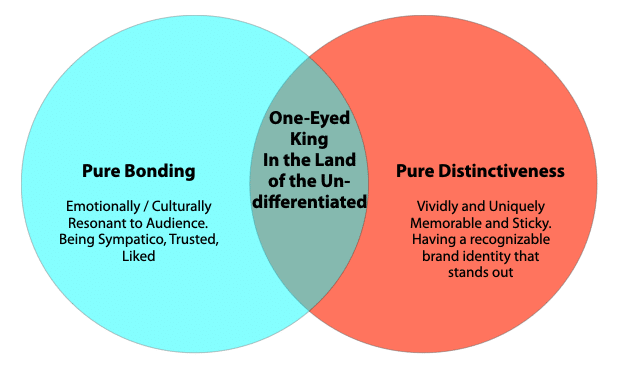 In other words, before Red Bull lost its differentiation, it adding bonding to it’s mix of advertising to remain the “one-eyed king in the land of the Undifferentiated”

So Red Bull still retains over 40% of the energy drink market to this day.

And that’s why it’s smart to start with bonding and distinctiveness.

Because differentiation can usually be copied or even stolen, while bonding can’t, and distinctiveness is far easier to defend than patents.

So if you’re in a field where real differentiation is nearly impossible, don’t fret.

Strive to use bonding and distinctiveness to grab the lion’s share of the market.

What’s Possible with a Trifecta

So what about differentiation?

Is it really binary?

Either you are utterly unique or totally undifferentiated?

Or is it more of a continuum?

Or maybe just the only one openly advertising that “unique” offer in your local area?

They’re certainly not unique in being in a junk removal service.

And they’re probably only semi-unique in being a “full service” junk removal service.

Meaning that you don’t have to move the junk to curbside, they’ll come and get it right from wherever it’s laying.

But they’re certainly unique in advertising themselves as full-service.

Does it matter if there is potentially another junk removal company offering full service if 1-800-GOT-JUNK? is the only one you know about?

Now throw in the fact that their ads have no small amount of bonding and brand distinctiveness, and you have a recipe for earth shattering results.

Check out their TV ads and see for yourself:

And, indeed, their trifecta campaign doubled their sales volume in under X years, taking them from 200 million to over 400 million.

What’s In Your Ad Campaign?

Once you understand that differentiation is a sliding scale rather than a binary, the question becomes, how would you rate your branding campaign on these three factors?

How powerful is your bonding?

How distinctive is your branding & how strong are your brand assets?

As an example of the last factor, do you offer later hours? 24-7 service? Exclusive brands or guarantees?

And if you’re not happy with any of your scores on any three of those key factors, perhaps it’s time to bring in a new advertising expert to help.